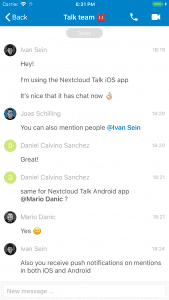 Nextcloud Talk is a self-hosted, enterprise-ready audio/video and text chat solution giving users the highest degree of control over their data and communication. It was announced on January 11, 2018, and we are excited to present you the main improvements of this release.

Shortcuts were added for this release and can now be used in active calls: M for mute, V for video, F for full-screen, C for chat and P for participant list.

Participants can now be @mentioned in the chat by starting to type @ followed by the name of the user.

Since this release it is possible to have multiple chats at the same time in different tabs.

You can now join a call without camera and/or microphone.

Unread chat message count will be displayed in the room list with this release.

Of course this version of Talk also brings many bugfixes and additional improvements. Here’s a quick list:

Please note that if you are a mobile user, you will need a recent version of the Nextcloud Talk mobile app to have access to these improvements. We encourage you to update your mobile apps at least to 1.3.0 on iOS (or the most recent version 1.3.1) and 1.1.3 on Android.

If you have not checked out Nextcloud Talk, time to get started: