Heise and c’t recommend to keep your data self hosted, encrypted and under control 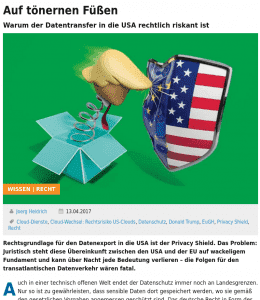 Today, German news outlet Heise reported on the recommendation by computer magazine c’t to leave US clouds and keep data on European servers. An earlier analysis declared the USA ‘walling itself in’ after President Trump signed an executive order throwing heavy doubt on the successor of the data privacy protecting Safe Harbour agreement, Privacy Shield.

Journalist Swapnil Bhartiya pointed out in a blog that:

Trump is not a huge fan of privacy or open internet. The new UK government is also heading in the same direction.

Efforts to enforce encryption backdoors, threats to net neutrality and even journalistic integrity show how quickly governments are changing their stance.

With the General Data Protection Regulation Europe will enforce even stronger user privacy regulations starting in 2018, forbidding data processors to store sensitive data outside of a list of approved countries. These regulations are wholly incompatible with the changes in other countries, prompting at the very least costly and difficult data migrations for companies making use of public, US based clouds. Worse, mistakes could become very costly with the GDPR sanctions going up to 20 million euro or 4% of the annual, global turnover of businesses, whichever is greater!

Even European hosted solutions in jeopardy

Even European hosted solutions developed by American companies, like Telekom’s Microsoft Office 365, are far from safe with the last executive order already shaking its foundations. It states that any data under control of a US company is to be turned over in case of a request from US law enforcement agencies. US companies own the software companies use (a software license does not transfer ownership!) so in the worst reading this could mean they would be obligated to hand over data residing in out-of-country hosting centers managed by third parties. This argument is even stronger if it is a collaborative offering with a third party hoster.

A long term solution under control of your business is the safest, most reliable method of shielding your company from lawsuits. Nextcloud adds the benefit of avoiding costly migrations, independence from any single vendor and optional encrypted storage!

Learn about securely storing your data with Nextcloud