Connect your web app to Nextcloud with WebDAV-fs 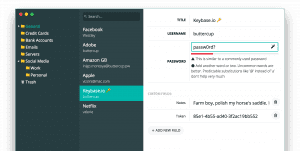 While building Buttercup password manager, I was constantly looking for a suitable method to allow me to store my archive files so that they would be accessible on each device that I use. As I was already using free, self-hosted cloud storage options like Nextcloud, this seemed like the obvious method to try first.

Like several cloud storage solutions, Nextcloud supports WebDAV as a means of accessing files remotely. WebDAV is quite a mature and commonplace protocol that allows for easy integration amongst synchronization and file-storage tools. It’s also quite easy to implement client applications (from existing libraries or from scratch), depending on the use case.

Finally, WebDAV is a web-based protocol that runs over the top of HTTP, and can even be setup as a server using Apache, for example. This makes it lightweight and easily accessible to simple JavaScript applications for desktop or mobile platforms.

For all of these reasons and more, WebDAV seemed like the best possible choice to start with in terms of password archive storage for Buttercup. At the time I didn’t find any particularly appealing libraries to use, so I wrote my own.

WebDAV-fs is a NodeJS WebDAV client that provides many methods for interacting with WebDAV servers. The fs in the title denotes that the library is intended to resemble Node’s fs module, and it implements some of its most-used methods:

Synchronous methods are obviously not supported due to the necessity of making RESTful requests.

WebDAV-fs began its life as its own project but was eventually split into two, branching off of the new WebDAV-client. The newer WebDAV-client project provides basically the same functionality, just with a more async-friendly API.

It’s clear to see just how simple it is reading from a remote server when you’re using WebDAV-client with Nextcloud, for instance. Here’s an example that reads a directory on a Nextcloud demo server:

This example asynchronously fetches the contents of the root of the Nextcloud server and logs all of the files and directories contained within. File explorers (that allow for the choosing of files) can be easily implemented around such a method as getDirectoryContents.

Applications like Buttercup can then very easily use tools such as this to read and write files remotely:

The benefit to using WebDAV-fs over WebDAV-client is that because it resembles the NodeJS fs API, the two can usually be used interchangeably if the application is designed for such work. Switching between local and remote files such as Buttercup does is made easy by the resemblance.

What was even more important for me when writing these tools was the ability to continue accessing storages like Nextcloud when working in the browser instead of NodeJS. Transpiling these libraries for use in the browser (with tools like webpack & browserify) works very well, and the final script is of reasonable size. At the core of webdav-client is node-fetch which provides the fetch method in both NodeJS and browser environments.

After some weeks of building and testing these libraries I discovered that quite a number of services and applications support WebDAV:

That’s already a great amount of coverage, and all under one single dependency!

So if you want to provide people with an easy way to store files in their webDAV compatible cloud storage from within your JS application, WebDAV-fs is your friend.

For the past several years, Europe has been fighting for its digital sovereignty, and this is escalating as also covered by Tech Crunch. The most well-known names in the software-as-a-service industry – American firms Microsoft and Google – have been growing their business in the European market for a long time thanks to their name […]