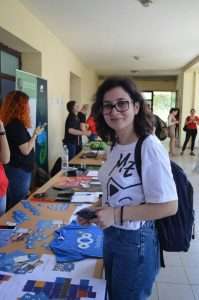 Xheni Myrtaj is a member of Open Labs Albania, a community which promotes free and open source technologies, open data, open technological standards, online privacy and more. The community was recently instrumental in the migration of the capital of Albania to Nextcloud. She has studied Business Informatics and is currently studying Msc in Information Security. Myrtaj will be delivering a talk at the upcoming Nextcloud conference. We talked to Myrtaj to learn more about her session at the conference.

What will you be talking about at the conference?

What kind of work have you done on the contacts app? I mean is you team the sole developer contribution behind the app?

We are not the only developers working in the Contacts App, but as part of RGSoC program we are the only team working on it. Other contributors are very friendly and helpful. We have started to fix some Contacts app issues and we are planning to improve some features.

What was the inspiration behind the talk?

This talk is about my experience as a Rails Girls Summer of Code student working on the  Nextcloud Project. I am very happy because I will have the opportunity to meet other  contributors and share my opinion and thoughts with them.

What is Rails Girls Summer and how are you associated with it?

At OSCAL (third edition), Jona met Jan-Christoph Borchardt, who is our mentor now and had the chance to talk with him. After some months, we saw his tweet about a dedicated scholarship program that aims to foster diversity in Open Source since 2013, called “Rails Girls Summer of Code”. Selected teams receive a three-month scholarship to work on selected Open Source projects. Team Codeaholics is one of the sponsored teams this year.

Is there some kind of partnership between Rails Girls Summer with Nextcloud?

During our application for Rails Girls Summer of Code, we had to choose 1-2 projects that we wanted to work on. After scouting all the projects listed, the first one that was deemed a perfect fit for them was Nextcloud. Why? Because we were already using it and they were familiar (not a lot) with the community. Both of us believe that when you use something and you like it, it’s very easy for you to start promoting and working on it, in this way you will always do something that you love and are not forced to. We are the first Albanian team part of RGSoC.

Can you tell us more about OSCAL?

The Conference gathers free libre open source technology users, developers, academics, governmental agencies and people who share the idea that software should be free and open for the local community and governments to develop and customize to its needs; that knowledge is a communal property and free and open to everyone.

Just like other successful regional conferences OSCAL provides a fertile ground to build and enhance networking within the tech community, both in the local region and worldwide by being used as a meeting point for a network of individuals and companies with the aim of sponsoring and initiating projects which benefit the people and taxpayers in Albania and which should also result in commercial benefits for the surrounding region.

The conference is supported and organized byOpen Labs , the community that promotes free libre open source culture in Albania since 2012. Open Labs is a non-government non-profit organization, based in Albania, that aims to support and promote initiatives which provide tools that bring knowledge closer to those more in need.

After picking each other as teammates, Jona and I had to decide about the project we wanted to spend all our summer working on. Wait, what about the name of the team? We named it Codeaholics.

Open Labs Albania is a non governmental, not for profit organization, dedicated to promote openness, freedom, transparency and decentralization by amplifying its voice as a community altogether.

Open Labs is a community of people from all ages, genders, ethnics and races, who are advocates of FLOSS ( Free Libre Open Source Software), the Open Web and Free Speech, who dedicate their time to free knowledge for everyone.

Primary projects of the community are:

We’re proud that in Open Labs we have communities such as: