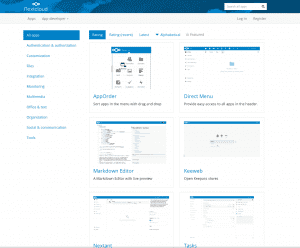 There are and have been a number of changes coming to the Nextcloud App Store and we’d like to cover them in this blog! They are not yet all deployed but they should come soon.

The Auth category has been superseded by the security category. Your apps will be migrated manually by us once we deploy a new version, new apps uploaded with the <category>auth</category> tag will be transformed automatically to <category>security</category> for now. Please update your app XML since we will remove this at some point!

We also added a games category.

Support for Nextcloud 9 and 10 was removed. This means that the old OCS API (/api/v0) will stop to work and when uploading apps there will be no validation for 9 and 10. You can still publish apps for those versions but your users won’t be able to install them via the Nextcloud server admin interface. However you can still download and install the archives manually. Furthermore the following categories will not be migrated anymore so you must change them in your info.xml: tool, game, productivity, other

Users are now logged in after confirming their email. No additional login needed. And buttons are now all blue instead of a mix of blue and green!

When database.xml validation failed the error message showed info.xml as the culprit. This is now fixed.

Last but not least, in the app store itself code testing coverage for Python has been added and we bumped it up all the way to 97%, mostly by adding new selenium (frontend) tests. This should result in less issues and bugs when we do releases! Despite this we need some extensive testing because of Django (the web framework) and database schema upgrades. But after we deployed all this successfully we plan to release version 3.0 of the app store.

Remember, the app store is fully open source software and you can contribute!