In a validation of Nextcloud’s hybrid and on-premises product strategy, Vanson Bourne has found in their yearly survey of over 2650 IT decision makers at large enterprises that 73% of respondents are migrating applications away from the public cloud back to on-premises infrastructures. With security cited by 60% as the biggest factor impacting their future cloud strategy and costs another consideration, the lower-than-expected growth of cloud services can be explained.

A cloud infrastructure running in a corporate data center or privately hosted by a third-party service provider. The line between traditional data center solutions and private cloud is becoming blurred lately.

IaaS (Infrastructure-as-a-Service) and PaaS (Platform-as-a-Service) solutions from providers like Amazon Web Services, Microsoft Azure or Google Cloud Platform, or a local competitor to these like IONOS and Telekom Cloud.

A combination of private and public cloud, using interoperable or scale-out applications.

In reality, many businesses use a wide range of services that are often a mix of the above. The number of these services ranges from just a few dozen to over 100 – which often result in a complicated mess for IT to handle.

This also adds to significant compliance risks, with most SaaS platforms time and again showing to not be compliant with privacy legislation like the GDPR. Even, or perhaps especially, solutions from prominent vendors like Microsoft, fail to follow the requirements and risk business data as a Data Protection Impact Assesment of Office 365 by the Dutch government showed again in mid 2020.

Different workloads have different legal, compliance and security requirements so there is no one perfect cloud. But hybrid cloud is considered by 85% to be the ideal IT operating model and the largest percentage of respondents (49%) cited hybrid cloud as the model meeting all of their needs.

Enterprises plan to aggressively shift investment to hybrid cloud architectures, though their short-term cloud deployment plans have hit a significant speed bump during the past year. Nearly three-fourths of 2019 respondents reported that they’re moving some number of applications from the public cloud back on-premises, and, correspondingly, the use of traditional, non-cloud-enabled data centers actually increased slightly instead of dropping by more than 20%, as expected. 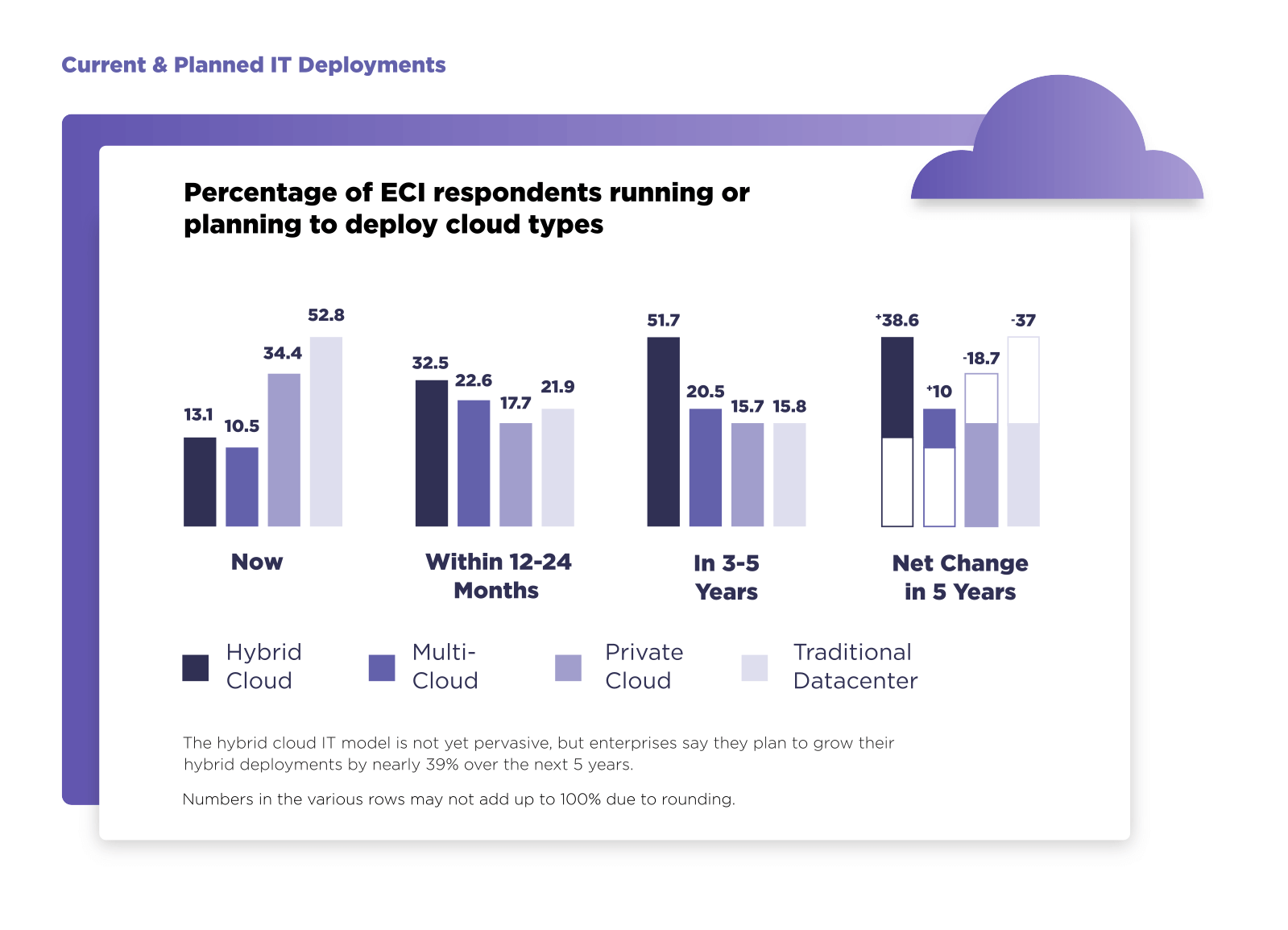 Note that as of today (from figure 1) the traditional data center still represents the largest amount of currently planned cloud deployments, and private cloud is next. In 3-5 years, hybrid cloud becomes the biggest. It is also worth noting that cloud adoption across the industry is behind on predictions. Security might be the best explanation of this, as public clouds are considered dangerous. And studies have shown that a wild growth of cloud services in modern companies multiply the risk of ransomware attacks and other security breaches. But they are also a risk to budgeting!

A recent article on devops.com reported that billions are wasted in public cloud due to idle or overprovisioned resources, largely caused by the complexity of planning capacity. Budgeting correctly is hard and does not get solved by simply moving to ‘the cloud’.

Similarly, a zdnet article quotes from studies in the UK that nearly 60% of businesses feel the move to the cloud was over-hyped and under-delivered for them. And 9 out of 10 confessed that cloud migration has been delayed in their organisation due to “unforeseen factors”.

It is no surprise Vanson Bourne continues:

Current thinking based on years of cloud experience concludes that applications with unpredictable usage are best suited to the public cloud, while more predictable workloads can run on-premises at a lower cost of a public cloud solution. Savings are also incumbent on businesses’ ability to match each application to the appropriate cloud service and pricing tier and to remain diligent about regularly reviewing service plans and fees, which change frequently, and adjusting plans and pricing tiers accordingly.

The result is continued and increasing deployments of private clouds and even traditional data centers, with 91% saying their organizations are investing in reskilling their IT team to keep up with emerging technologies!

The wild growth of SAAS services employed in organizations overload IT departments and increase business, security, cost and compliance risks. Awareness of this problem has caused a push towards consolidation. The Nextcloud app platform, with well over 200 apps providing extensive collaboration and communication capabilities, is perfectly positioned to benefit from these trends. Nextcloud offers enterprises a way to cut down on the amount of SAAS services while hosting the platform under their control, either on-premises or hybrid.