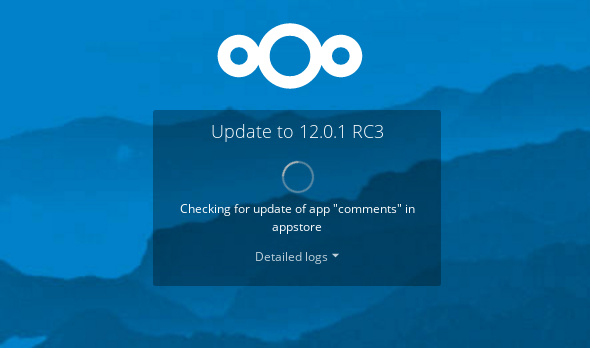 After over 2 months of hard work, we finally release a new set of updates to Nextcloud 10, 11 and 12. These bring a large number of fixes with over 120 improvements in Nextcloud 12 and several dozen in Nextcloud 10 and 11. We want to thank the almost 100 community members who helped us test these improvements over the last weeks!The Nextcloud Snap will start to update soon and we expect distributions to deliver the improvements to their users swiftly as well.

NOTE that we strongly recommend to use the command line to execute the upgrade. Several users have reported time-outs in a long running job which can break the upgrade using the web UI! See our documentation. This issue has caused us to decide to not roll out 12.0.1 yet to all users on the stable channel but, instead, wait until we have fixed it in 12.0.3 (12.0.2 was released after less than a week with a single, critical fix).

This release fixes a number of potential issues and adds a series of small improvements to usability, performance and reliability. It also introduces the Nextcloud Education Edition bundle, a set of apps aiming for the Educational market which is quickly adopting Nextcloud.

Besides bugfixes and the new bundle, some other minor improvements were included. A few highlights:

Shortly after the release we encountered an issue that sometimes causes time-outs using the web update (it does work when updating using the command line occ tool) so we decided to wait rolling out Nextcloud 12 to the Stable channel until we have fix in 12.0.2.

That's how every day should start ? ! I like flawless upgrades ? ! Thank you @Nextclouders for the good work! Everything is up and running ? pic.twitter.com/rqxiqyZNO5

NOTE that we strongly recommend to use the command line to execute the upgrade. Several users have reported time-outs in a long running job which can break the upgrade using the web UI! See our documentation.

Also note that this was the last planned update for Nextcloud 10, we strongly recommend upgrading to Nextcloud 11 within the next few weeks!

If you receive a `Table 'nextcloud.oc_accounts' doesn’t exist` exception while upgrading, you can add these three lines as a workaround until we release 12.0.2. The issue came to our attention just after we finished the release and didn’t show up in any previous testing so we expect this to only hit very few users.

Of course, whenever you prepare for an upgrade and certainly a migration, it is wise to help test release candidates. Those who find an upgrade bug earn a t-shirt, plus: we fix the issue so that when the final release is out it all goes smooth!

If you are interested in privacy & the dangers of surveillance and believe in self-hosting as an important part of the solution, the Nextcloud Conference, starting on August 22 in Berlin is the place to be.

During the week we will discuss and code in small teams while Friday we have a program aimed at enterprise users. Saturday 26 and Sunday the 27th of August we feature keynotes, lightning talks and workshops where you can learn more about Nextcloud, its apps, its people and its ambitions. Here’s a blog with some reasons why you should join!

If you’re convinced already, learn more or just register for free on our website.