Nextcloud provides industry-leading on-premises file sync and online collaboration technology to customers all over the world. Security is not just a priority, it’s a core component of its entire business strategy. Nextcloud’s solutions excel at giving their business customers the power to know where data is, who has access, and that even metadata does not leak. This requires a security-first approach to how they design, build, test, and position their products. Nextcloud has elevated security from a cost center to an integral part of their business and brand.

Nextcloud’s lightning fast response times are impressive and make them a model for how to build an efficient bug bounty triage and response process.

The Nextcloud security team has resolved more than 100 valid unique security vulnerabilities to date, while keeping their response time to under one-hour. This makes Nextcloud one of the most responsive security teams on HackerOne.

Nobody can hire enough engineers to protect against every possible vulnerability and threat, but we can use our bug bounty program to add on-demand expertise where we need it and continuous coverage nearly everywhere else. Security isn’t a feature for us, it is a strategy. We started Nextcloud on the premise of building a more secure solution and security is considered in everything we do. 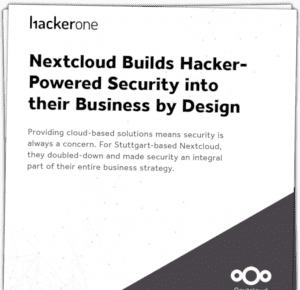 Nextcloud’s lightning fast response times are impressive and make them a model for how to build an efficient bug bounty triage and response process. Their commitment to responsiveness and putting security first puts them in the best position to attract top hacker talent to continue to supplement the good work their internal security team is doing to protect customers.

As a cloud technology company within the European Union, and that stores customer data, Nextcloud was quick to put GDPR compliance features into its product. The HackerOne bug bounty program is more than just proof of Nextcloud’s security, it is an investment to protect against potential GDPR infractions through fast ongoing vulnerability detection and remediation.

For more on our approach to security as a competitive differentiator, including our top three tips for bug bounty success, check out the case study.